Aeronaut manufactures a range of very wide gantry machines which can be used for large-scale cutting, plotting and processing of materials as diverse as concrete, carpet, stencils and composite panels.

Most high-end racing sails are not woven or made on any type of weaving machine. They are manufactured one by one using special machines which have come to be known as Stringers. The reason for this is that way back when the process was begun, the fibres were stretched between nails banged into the floor like string.

There are dozens of names for these membrane sails including D4, Stratis, 3DL etc. but the chances are that if a sail isn't made by Norths, it's made on an Aeronaut yarn layer or stringer. Dozens of machines have been sold and are operating all around the world making membrane sails. 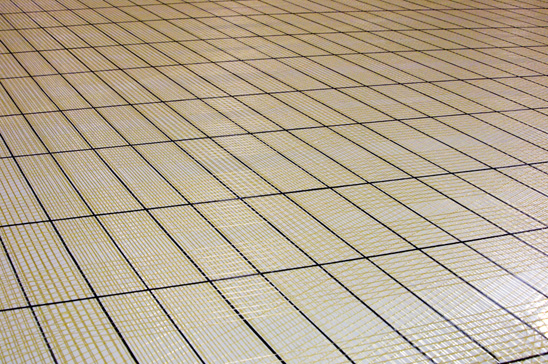 Aeronaut has been manufacturing stringers or yarn-layers in Australia since 1996. Bob Fraser from Fraser Sails took a look at the incredibly expensive 3D methods used by North Sails, and the primitive methods being used in Asia and decided there had to be a middle course. Simple wide span, low-cost machines working in 2D, holding lots of yarns compared with the 2 or 3 yarns carried on narrow machines used in Asia. The large panels would joined make sails shaped with just a few seams to give them strength.

The rest, as they say, is history. The vast majority of plants (they are seldom sail lofts any more) who make string or membrane sails round the world are using wide span machines, mostly up to 10.5 metres wide, laying up to 18 fibres at a time, often 24 hours a day and at speeds approaching 1 metre per second. And the vast majority of these machines are made by Aeronaut. 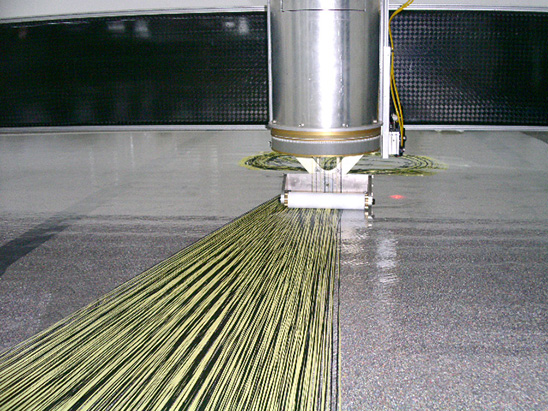 The first machines made for Fraser Sails were 5 metres wide, because that was as wide as we could buy the aluminium extrusion. It was soon realised that the wider the machine, the less the waste since either very large panels or entire sails could be laid at once. Aeronaut undertook to engineer a carbon fibre gantry machine to support the considerable weight of the yarn laying head (partly because only we knew how much those early aluminium gantry machines flexed and twisted under load.) This meant building a special mould and an oven for fabricating these giant machines in-house.

It also meant developing special software too. When the yarn head reaches the edge of a plot, the head rotates and heads back in the opposite direction, forming a loop. Sail design software develops the paths along which the yarn head runs, but the loops are part of the manufacturing process and depending on the fibre being laid (carbon, kevlar, polyester etc.) the loops size is often different.

Aeronaut's Tangent software is used by most lofts to generate loops and control the plotter. Tangent reads in patterns from a range of sail design softawre and does loop generation on a panel by panel basis, or on entire sails to produce so-called one piece sails. So-called because the yarn laying is done in one piece, but the sail is slit and broad-seam shaping added before joining again. 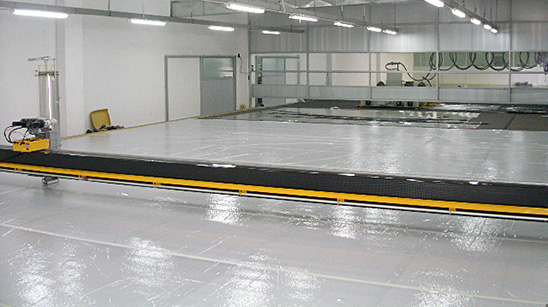 Aeronaut manufactures two ranges of yarn laying plotters or stringers. One is the giant 10.5 metre carbon type, and the other is a somewhat lower cost aluminium gantry which can be supplied up to 6.5 metres wide. (It's the same newer, stiffer and lighter gantry used on Elektron Plotters. If our factory manager who weighs around 85 kgs sits in the middle of this extrusion, it deflects around 6mm.)

This type of manufacturing is not really mainstream for the company

But you can see lines of trucks queueing to pick up the crates from the factory on a regular basis.

If you want to know more about this technology, please contact the factory. The technology changes at a rapid pace, and maybe we don't have time to put it up on the web site!